The 5-foot-7 senior forward and midfielder led the Mustangs to a 21-2 record and a second-straight Class AAA state championship this past season.

Young recorded 16 goals and 14 assists, including the lone score in Houston’s 1-0 win over Collierville High in the state title game. A United Soccer Coaches All-American selection, Young participated in the High School All-American Game. She concluded her prep soccer career with 39 goals and 34 assists.

Young has volunteered locally with Mission of Mercy, providing dental care to those in need, and for Locks of Love.

“Cara has moved to several different positions during her high school career and she did it willingly and did it well,” said Alexis Heinz, head coach of Briarcrest Christian High. “She works hard in the attack and very hard to get back on defense.”

Young maintained a weighted 3.38 GPA in the classroom. Taking advantage of NCAA early signing rules, Young inked a financial-aid agreement that paved the way for her to enroll at the University of Arkansas, where she will play soccer. She graduated from high school in December and recently completed her first semester at Arkansas.

She is the third member of Houston Girls Soccer program to earn this honor in the last four years and fourth overall. 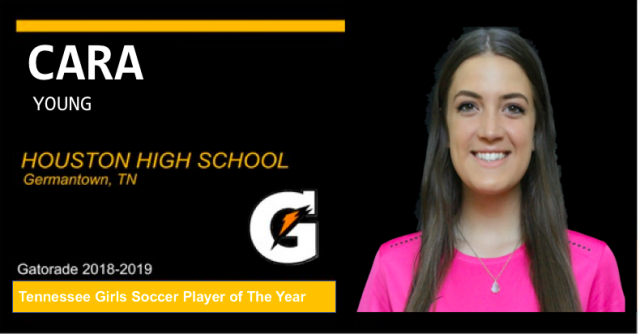