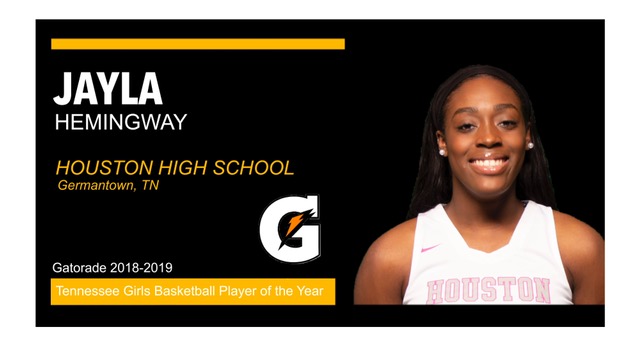 — In its 34th year of honoring the nation’s best high school athletes, The Gatorade Company, today announced Jayla Hemingway of Houston High School as its 2018-19 Gatorade Tennessee Girls Basketball Player of the Year.

Hemingway is the first Gatorade Tennessee Girls Basketball Player of the Year to be chosen from Houston High School. The award, which recognizes not only outstanding athletic excellence, but also high standards of academic achievement and exemplary character demonstrated on and off the field, distinguishes Hemingway as Tennessee’s best high school girls basketball player. She is the 8th athlete in 5 different sports at Houston High School to have earned this award.

The 5-foot-9 senior guard had led the Mustangs to a 31-3 record. Hemingway averaged 22.7 points, 7.5 rebounds, 3.2 steals and 1.9 assists through 31 games. A two-time First Team All-State selection, Hemingway was the district tournament MVP as a freshman and sophomore, and was named the region tournament MVP as a junior. Ranked as the No. 19 recruit in the Class of 2019 by ProspectsNation.com, she entered the state quarterfinals with 2,540 points in her prep basketball career. A member of the Future Farmers of America, Hemingway has volunteered locally as part of multiple community service initiatives through Houston High’s Leadership Academy.

“Jayla Hemingway is a tireless worker and a fantastic person,” said Ben Moore, head coach of Houston High. “She is the most talented player that I have ever coached.” Hemingway has maintained a weighted 3.79 GPA in the classroom. She has signed a national letter of intent to play basketball on scholarship at Mississippi State University beginning this fall.

The Gatorade Player of the Year program is proud to recognize the nation’s most elite high school athletes for not only athletic excellence, but also for high standards of academic achievement and exemplary character.