For thousands of athletes each year, a dream is conceived at the beginning of their respective journeys. It fuels millions of minutes of motivation and an infinite number of miles on the track, reps in the weight room and beads of perspiration.

Visions of celebrations, joyous locker rooms, raising trophies and overweight coaches dancing are earnestly wished into reality. For many, the idea that this accomplishment will be the defining moment or the ultimate success of a life still searching for meaning.

But at Houston High School, it is merely one of the many experiences allowing athletes to understand some of the essential life lessons every individual must be able to master on his or her journey throughout life…it is NOT the destination, it is simply a stop along the way.

Dealing with failure, expectations, success, difficult teammates, time management issues, authority figures and the balance between not letting what you play define who you are as a person all swirl around inside the mind and heart of the modern athlete. Seeing this year’s Girls Basketball team take their journey once again reinforced how fortunate We are to be a part of a special place.

For the 2nd time in four years, We were the “Memphis Champion” after winning the Region 8 Championship over Central and representing that Region at the State Tournament. That State Tournament experience began with the draw which took place in Murfreesboro. 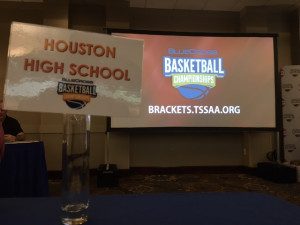 It was here We discovered Our 1st round opponent would be Clarksville High School.

The Wildcats were 27-5 and coming into the State Finals with a Cinderella run through the Region after finishing 3rd in their District during the regular season.

Like all teams making their first trip to State the first half of the first game is filled with nerves, that may have also been the case for the officials. The two teams combined for 32 free throw attempts in the first 16 minutes of the game with 3 players from each team having 2 fouls or more against them. It was nerve racking, it was ugly and it was close.

The second half was a different story, on all fronts. The game was not called as tightly and players responded.

Near the beginning of the 3rd quarter we scored on consecutive possessions and opened up a double figure lead.

As it has the entire year, the team leaned on it’s strength…physical, tenacious half-court man to man defense.

Head Coach Ben Moore saw his team force Clarksville to 26% (12-45) shooting for the game, which included 20% (3-15) shooting from behind the 3pt line, while also creating 17 turnovers on the day. Both numbers are excellent for a game being played with the highest stakes involved.

He also saw Our defense pressure the two leading scorer’s for the Wildcats into 13%     shooting (2-15) from the field for the game.

On offense, Coach Moore witnessed more of the balanced scoring that fueled the team on it’s run through tournament.

Shooting 44% (10-23) after the break as a team, propelled by more open floor opportunities, the Lady Mustangs never saw their lead go to one possession. Every potential threat ended with Us calmly

The final 13 point victory was the first in program history at the State Tournament, coupled with the 28th win of the season (also a record) sent US into The Final Four and the defending state champion.

Going into the matchup with Murfreesboro Riverdale, USA Today’s #1 ranked team in the country, Coach Moore communicated a  very simple game plan to the team, “We

are going to do what we have tried to do for the entire year…make it as difficult as possible for the other team to score.”

WE were in a battle with a team with a 58 game winning streak, who was trying to defend a state title and it was a one possession game with 16 minutes to play.

The 2nd half showed why OUR opponent

would go on the win their 2nd consecutive championship the following day. Their poise and defensive adjustments created some indecision from which We ultimately could not recover.

In fact, they were so good, they were not whistled for a foul the entire 2nd half of the game. That is also a state championship feat which will never be equaled. Eight players played a total of 80 minutes and did not foul one time…amazing!

Freshmen Destinee Wells scored 20 points in the game and was OUR only double figure scorer. Seniors Shannon Sharp, Rochelle Lee and Shaela Gardner finished their careers with 3 District, 2 Region, and 2 Sectional Championships, while beginning an incredible active streak of 28 consecutive wins in District play. They are the winningest class in the

As all of these individual journeys move forward, an air of excitement descends of OUR future. Those lessons learned, work ethic instilled, problems solved have brought into place a culture that has everyone involved wanting to see what comes next.