First year Head Girls Basketball Coach Ben Moore and Our team began the season with many questions that only time could answer.

With Saturday night’s gutty Sectional win over Arlington that secured Our girls another trip to the State Finals, they’ve shown with every test put before them this year…they won’t need a curve anytime soon.

After winning the District Tournament by an average of 39 points per game, Our Lady Mustangs prepared for one of the toughest Regions in the State and We were more than ready for the challenge.

Hamilton provided the first test and indication the road the State Finals would be hard earned. The 56-45 victory was a testament to the team’s tenacity of defense.

Whitehaven fell next 55-47 in the Region Semi-Finals and showed how versatile a time We have this year. We’ve had as many as four different players lead Us in scoring this season, making it more difficult for defenses to focus on one primary threat.

Central awaited Us in the Region Finals in the game every basketball fan in the city had wanted to see since the year began…and it did not disappoint. Region Tournament MVP Destinee Wells led the effort with 22 points while handling the primary ball handling duties against the Central defensive pressure. Jayla Hemingway and Madison Griggs, added 17 and 13 points respectively, were named to the All Region Tournament Team. But the defense from seniors Shannon Sharp, Shaela Gardner and Rochelle Lee made the championship possible. 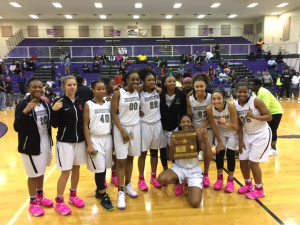 Arlington stood as Our last obstacle in the pursuit of a trip to Murfreesboro and like all things of great value, it was not easy to obtain.

Even though We started fast and ended the first quarter ahead 21-12, they provided the heart necessary to fight until the final moments. But once again, for the 27th time this year and the 54th time in the last two years, Our tenacious defense and offensive versatility found a way to prevail.

It was a celebration of months of work, but more a validation of Our girls talent molding together with Their leader, Coach Moore. After taking over a group loaded with talent that fell short a year earlier, he had a difficult job. Looking at all the smiles and tears of joy from players and parents after the final horn sounded, they looked as if every care in the world had floated away.