For the first time in Our illustrious athletic history, Our Freshmen Boys Basketball team has won the District Tournament.

After going 17-0 in league play, the group finished off Germantown High School for the title last night.

The tournament’s Most Valuable Player, Rodney Mason, led Us with 25 points and 12 rebounds. Hank Pearson’s 18 points and 10 rebounds coupled with Christian Clark’s 8 points and 5 rebounds both made any attempt to scratch back in the championship game by the Freshmen Red Devils futile. All 3 were named to the All-Tournament Team following the win.

In his first year, Houston High graduate Josh Davis coached the group to it’s best finish ever at this level.

Congratulations on a job well done to all involved. 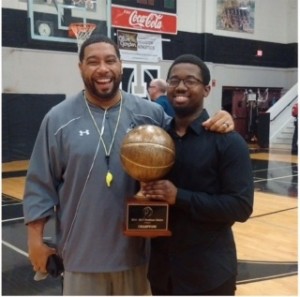