The Navy SEALS have maxim, “The only easy day was yesterday.” It emphasizes the idea of living in the moment. The mission of today presents new challenges and difficulties. They do not rest on past achievements because they believe what happened yesterday no longer counts.

This in many ways echoes the mindset of our Cross Country runners at Houston High. The mental determination and toughness required to maintain a standard of performance is difficult to measure.

Yesterday’s success is just that, but it is staggering to think about nonetheless.

Our Boys Cross Country team has won the Region Meet 19 times and qualified for the State Finals in every one of the 24 years we have competed, which included a championship streak of 11 years and another of 7 years along the way. They also have 6 State Championships…1997, 1998, 2000, 2003, 2004 & 2008, which is more than many SCHOOLS have earned. Senior Chris Rayder has an opportunity to be a top 5 finisher, one of many honors he has earned this season. 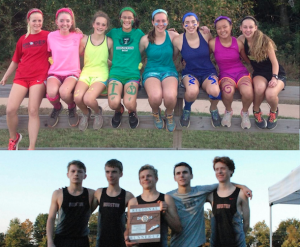 Our Girls Cross Country team is also a model of excellence. They have 14 Regional Championships including last year and are currently on a 3 three streak, while qualifying for the State Finals each of the 24 years we have competed. They are also the defending State Champion, our 4th for them that also includes 1999, 2000 & 2001.

We are led this year by Junior Ella Baran and Senior Michelle Myers, each have aspirations of finishing high on the leaderboard this weekend.

“Through our success we’ve gained a lot of confidence. This season we have had the group as a whole improve instead of just the individuals at the head of the pack. I fell we have done a better job of perfecting the process it takes to be successful,” Baran said.

Examples of this mindset were on display while winning two prestigious meets during the season: The Frank Horton Invitational and The West TN League Championship.

“Every team has it’s own personality, and this one has met the challenges that have been put before us. We have a long line of success that we represent when we step to the startling line…that is not lost on me. It helps with the fight to know there is a standard we will be held to long after we are done,” Myers said.

These are programs we take great pride in: both the success they have earned but also in the manner in which we compete.